All you can eat okonomiyaki, that’s how you celebrate Christmas (that and getting a wee bit merry!)

To quote the great noddy holder…..

Wait, I didn’t mean that much snow!

It’s finally over! I have survived Hell week (parts 1 and 2) and have now finished my first term at Akita International University! Although it’s been a hellish last few weeks, the last classes have also been good’uns.

There was Japanese class:

This is the wonderful food that Bonnie cooked for us:

(And my Mince Pies)

And then? Then THIS happened….

It started off slowly, just a couple of centimetres….and then it just didn’t stop. I woke up to a thunderstorm last Friday and opened my curtains to the sight of this:

It was at this point, I could justify packing my gaiters 🙂 (until they cleared all the paths and I looked a little foolish). Surprisingly, nobody panicked. There were a few wonderstruck people who’d never seen so much snow before, there were a lot of Japanese women who still decided it would be a good idea to wear heels (seriously?), but there was no one freaking out about how it might stop trains or flights….if there was even half this amount in the UK (well….England), there would be mass hysteria! It was a welcome break….and this is only the beginning! After about a week, it’s starting to melt away, but it’ll be back.

What has annoyed me a little is that, while they’ve been very efficient in clearing the roads, none of the adjoining paths have been cleared….This lead to a little adventure on Monday that possibly wasn’t the best of ideas…

I decided it would be a good day to walk to Wada (about 50 mins normally) to see if I could get some good pictures of the mountains….I didn’t bet on over half way not being cleared, so I had to push through up to a foot of snow! It was a good leg workout, but the number of “stupid gaijin” looks I got from people driving past was priceless! 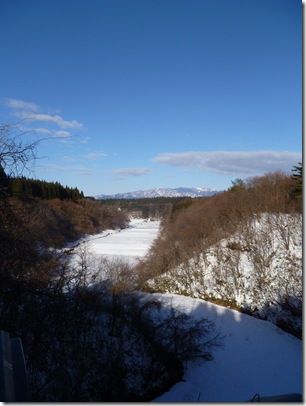 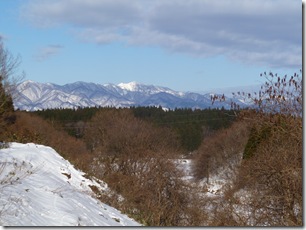 On another day I went out to get some pictures of the mountains and got some stunning results!

Well, that’s it for now, I’ll have a few Christmas posts in the next few days 🙂

This week was fantastic fun (especially for letting my creative juices flow). It was ‘school spirit week’ with a different theme to dress up in each day – admittedly not a lot of people dressed up, but those of us who did had a LOT of fun!

Wednesday was cross-dressing – a lot of gaijin guys dressing up in dresses with a couple of traps hanging about in there!

Thursday was heroes and villains – Elena and I decided (last minute) to make some avengers costumes because they would be showing the Avengers in the evening. Thanks to Daiso and Uniclo, this what all 3 of us came up with:

Friday was school colours (green and white) and then in the evening there was a ‘decades’ themed disco. It started out like a normal school disco – nobody really dancing and not many people there – but as we got through the 60s and into the 70s more people turned up and we were jamming to Abba, then Queen, Tina Turner, Gloria Gaynor, the Spice Girls, Fresh Prince of BelAir, Survivor, Green Day….you name a nostalgic song, we were there singing and dancing along to it!

I’ve also been having a creative nails week – starting off with some Scottish flags, then some snowflakes (due to the fact that we got more snow on Thursday) and then some patriotic Union flags today:

Oh, and it’s the 1st of DECEMBER!!!! First door of the advent calendar opened today 🙂 It also meant that I had a go at making mincemeat today – it should be ready before Christmas…..

Well, until then またね！